All of Todd Alan's designs are protected by copyright.

Gold for jewelry is also milled in subtle shades of green and red, also known as rose. Rose gold looks like brightly polished copper, but doesn’t tarnish like copper. Green gold is very close in shading to 14k yellow but has a slight greenish hue. White gold is silverish with a touch of yellow, or in the case of our palladium white gold, the color is a greyish silver (See pictures on the left for an example).

Platinum is not a gold but is a precious metal that is becoming more popular in fine jewelry. It is heavier than gold, and has a pure silver-gray sheen and is an incredibly strong metal.

Sterling silver is a much beloved and affordable metal with a whitish, silvery hue. But due to its brittle nature, we only offer it in certain metal combinations with it, please visit our Silver rings page to learn more.

We can weave any of our ring styles in combinations of any of these metals. If you are interested in using combinations of metal or different colored golds for your ring(s), please contact us with your request. 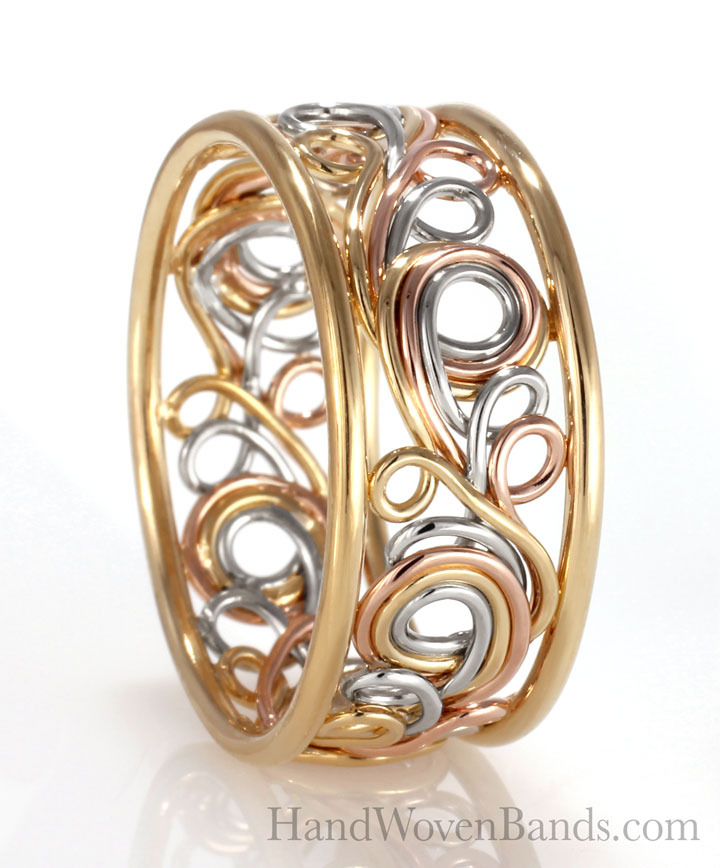 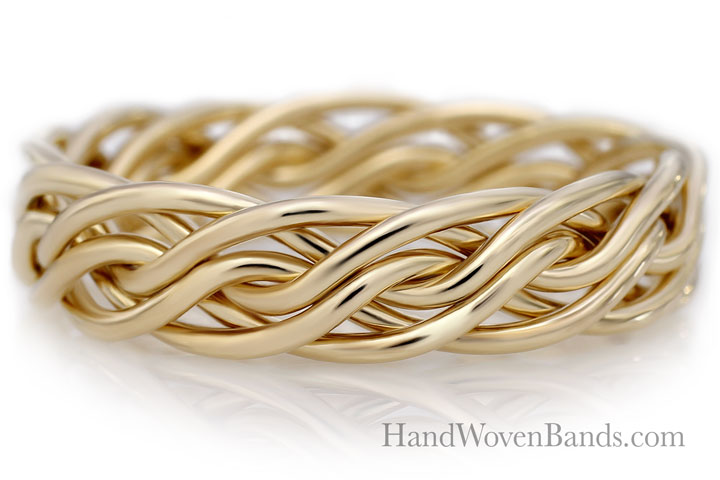 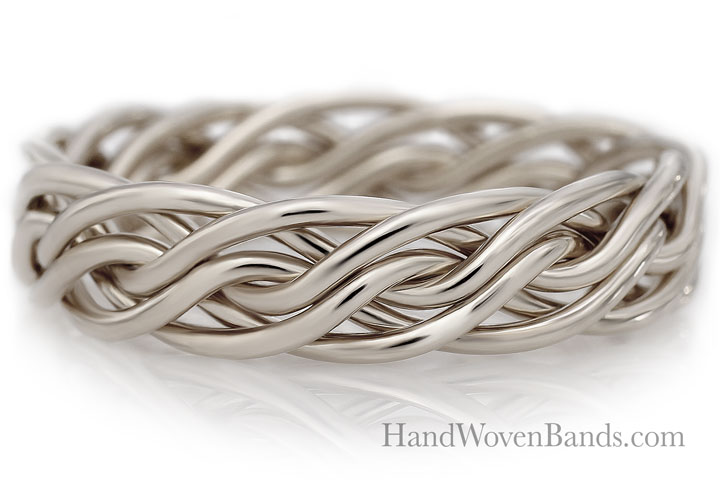 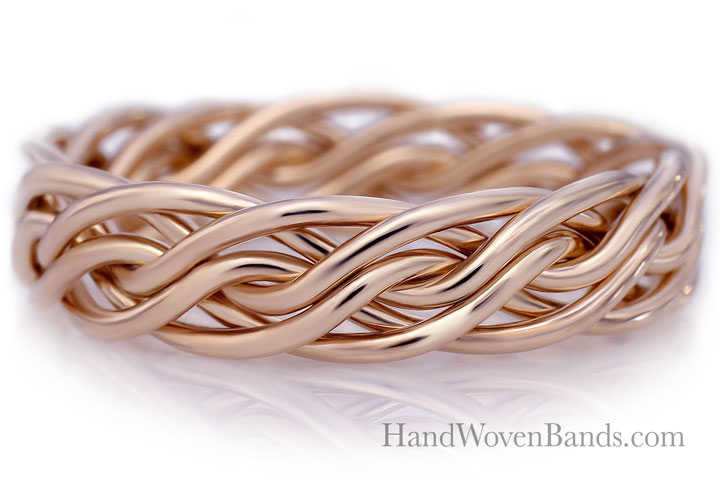 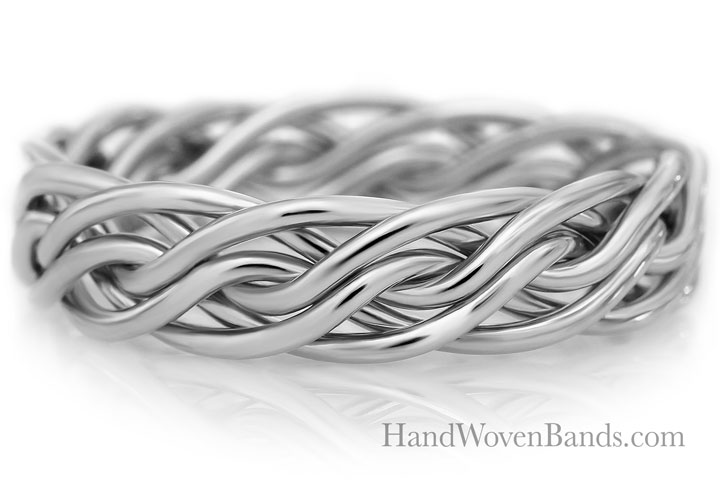 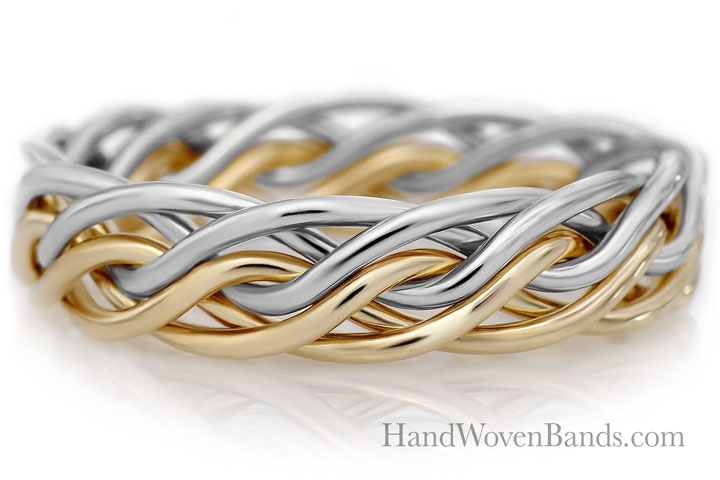 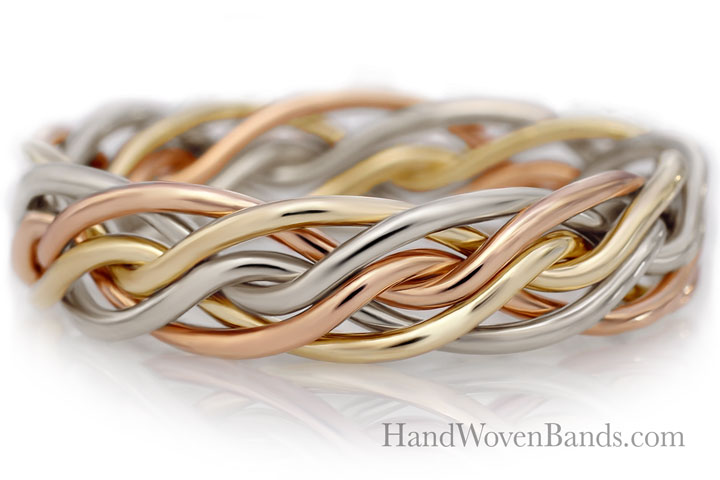 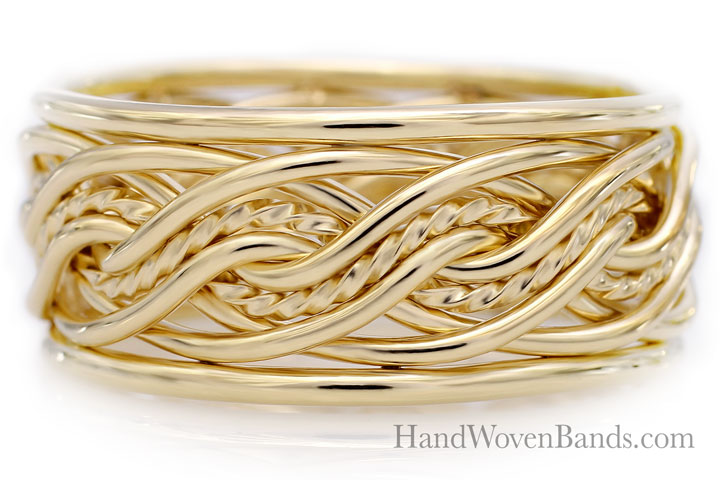 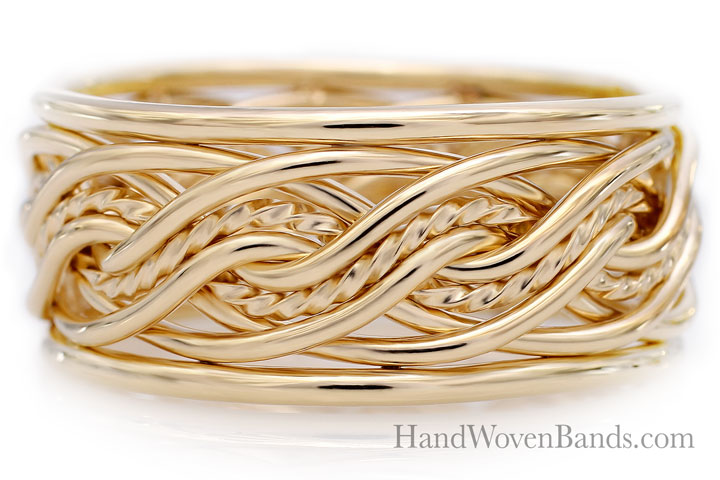 Gold is the most highly prized of all metals. Since the dawn of history, it has been sought after and treasured for its bright yellow glitter and malleability. The earliest craftspeople used gold to fashion decorative pieces of all kinds. In the Middle Ages, artisans were trained as goldsmiths to create jewelry and ornaments of the highest order, some of which even surpasses the work done by the craftsmen of today.

Gold found in its native state is rarely pure 24k, but is usually associated with silver and sometimes even mercury. In its natural state of pure gold, the substance is very malleable and can be hammered into very thin sheets. When the silver content is a high percentage of a naturally occurring gold mass, the metal is called electrum, which is a natural alloy. Gold is also found in tellurides and ore containing quartz wherein it is either visible, or enclosed in particles of sulfide minerals such as chalcopyrite, pyrrhotite, pyrite, and arsenopyrite. In some high production gold mines, the gold is not visible and can be seen only on a highly polished surface when viewed through a high powered microscope.

Unlike many other metals, gold has no oxides and is not affected by oxygen in the atmosphere. This is why gold does not tarnish – tarnishing is the result of metal reacting with oxygen in a process called oxidation. Gold is malleable to the point that it can be hammered into a leaf or sheet of foil 3/1,000,000 inches thick (0.000003 inches) on an area of approximately six square feet. The thin sheet is translucent and transmits a greenish light through the leaf.

Since gold alone is too soft to hold a form, gold is alloyed (combined with other metals) in order to make jewelry. When gold is alloyed, its ductility is diminished, but its malleability remains constant, except when large percentages of copper are added to the alloy. Nickel used as a white gold alloy has the same characteristics as silver. Zinc is added to the white gold alloy and lightens the color, but amounts in greater percentage than 14% of the entire alloyed mass will change the color to red and make the alloy brittle. The reason for using zinc in gold alloys is to absorb the oxygen to prevent silver and copper oxides in the mix. 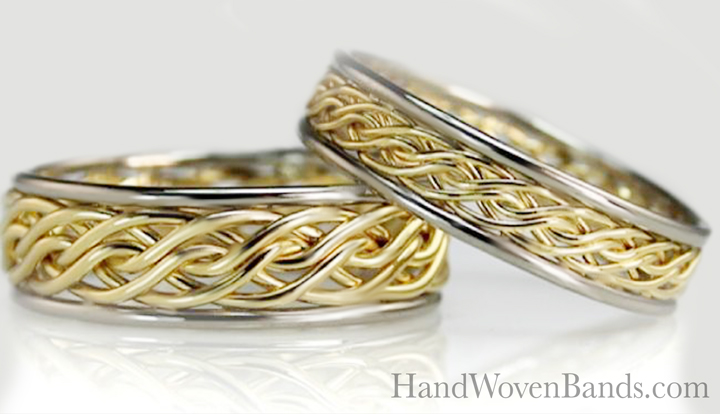 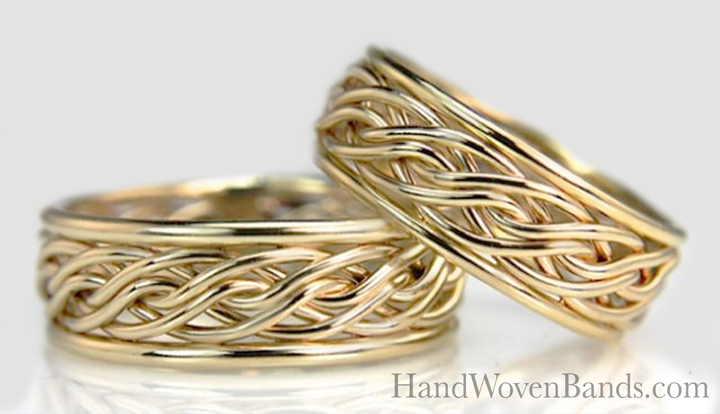 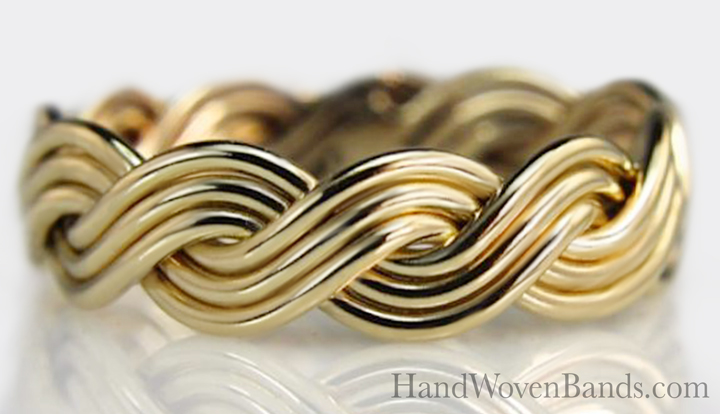 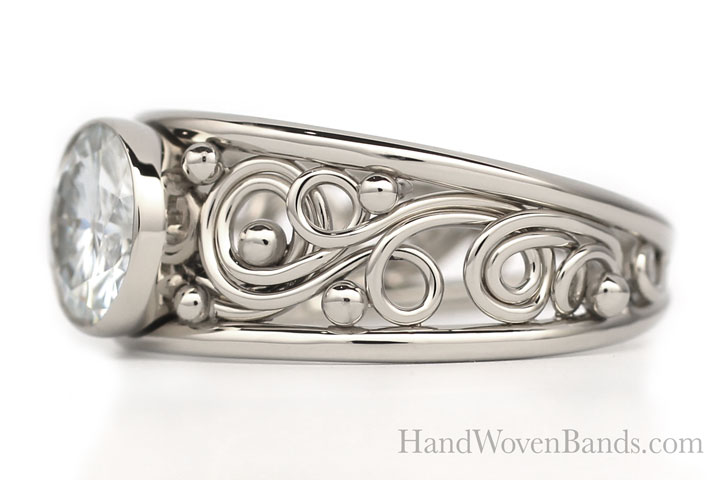 Standard white gold has a strong yellow tone to it and it often disappoints customers as most white gold you see in stores is plated with rhodium to make it look more “white”. We use the more expensive white gold to achieve a true white color without plating. This is the white gold used by many fine jewelers to make a higher quality product. The look of the white gold is similar to the look of platinum and is rapidly becoming the industry standard for fine white gold jewelry. 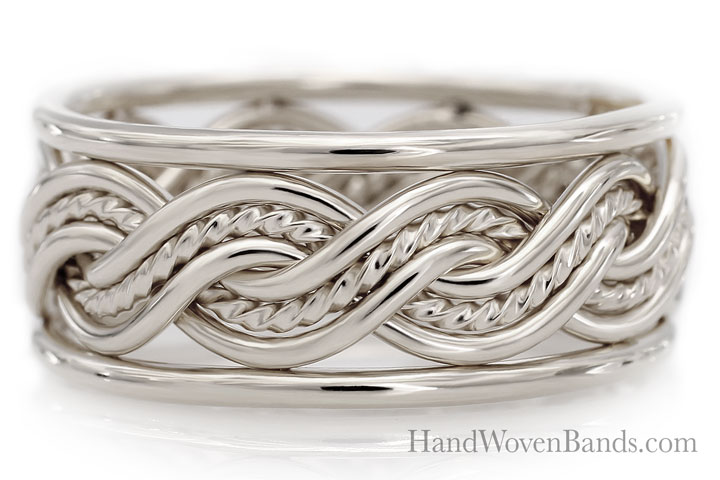 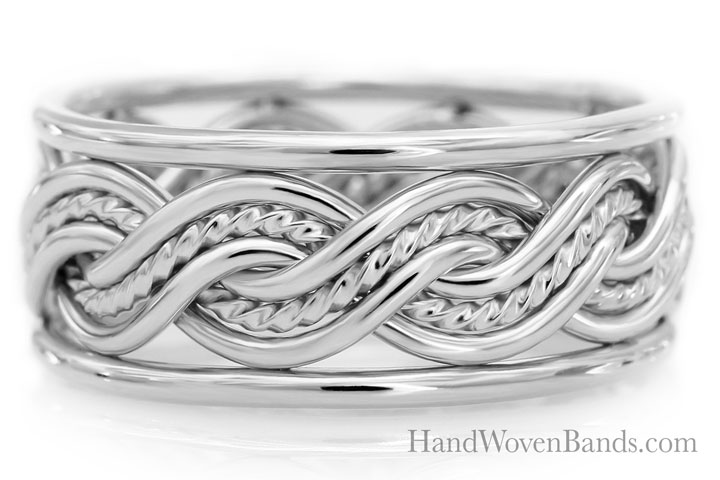 Platinum, rhodium, palladian – three of the six separate elements in the platinum family – are used for jewelry and decorative purposes. Platinum was in use for several centuries B.C., but a process to make it more malleable and workable was not discovered until 1804.

The color of the metal platinum is grayish white and resembles highly polished silver when finished. It is reasonably malleable and extremely ductile. The metal is softened with small percentages of silver or copper and is hardened when alloyed with iridium.

Like other metals, platinum work hardens and must be annealed to soften it to a malleable state.

In addition to its use as a precious metal for jewelry, platinum is used for electric wires, contact points, dentistry, and photography. It is the only metal that will fuse with glass without breaking the glass, hence its value for use in X-ray and other electronic tube manufacturing. 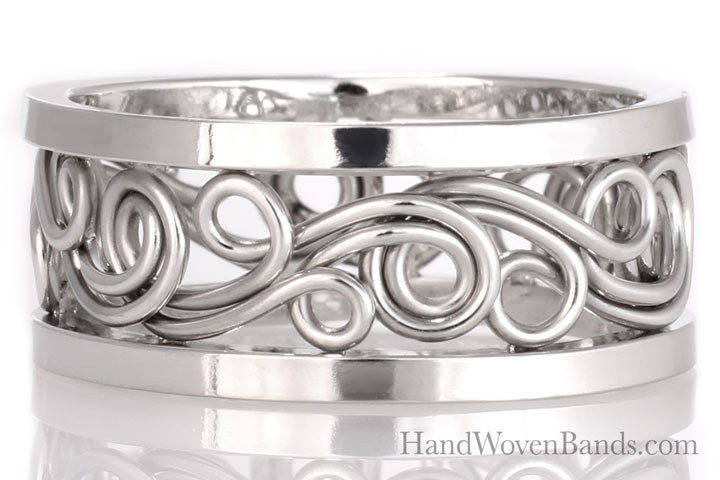 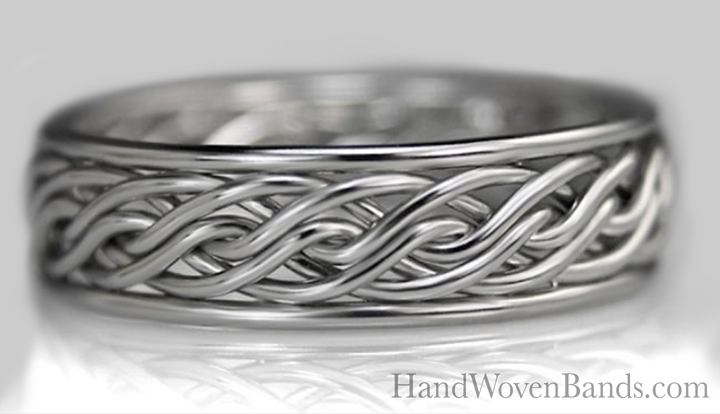 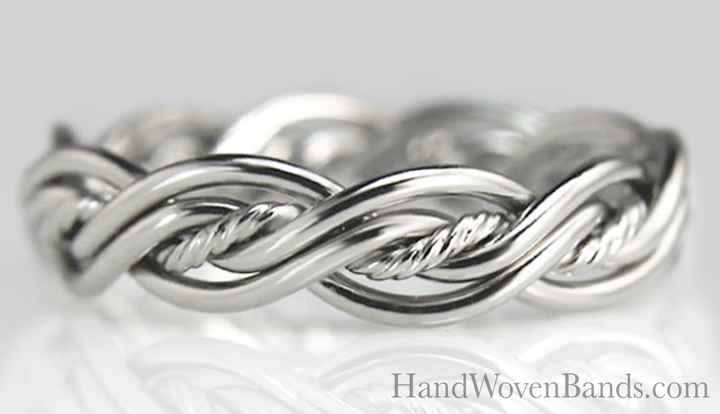 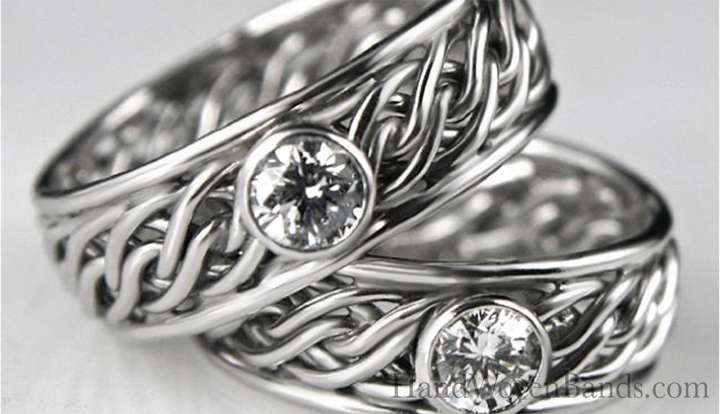 Silver, also called fine or pure silver, is the queen of metals and is a versatile metal with thousands of different uses. In addition to its use in jewelry and decorative objects, it is an important electroplating metal. The manufacturing of photographic film is dependent upon silver, and its use in dentistry is equally important. Other uses of silver include ecclesiastical and domestic plate, buttons, buckles, boxes, weapons, horse trappings, just to name a few.

Silver has been held in esteem through the centuries. Silver hallmarks came into use in A.D. 1300, and Sheffield plate, an innovation of the eighteenth century, gave birth to an important plating industry which still flourishes in the United States and in England.

Formerly used for coinage, its value has increased as much as its demand for other uses. Silver is still worked as a native craft in Mexico, Thailand, the southwestern United States, and in Peru.

Silver occurs in the ore as a metal associated with other metals, especially gold. When it occurs as a constituent of large percentage on a natural gold/silver alloy, the metal is called electrum. It is usually a byproduct of large mines producing gold, argentiferous lead, zinc, and copper ores, but is also found in cobalt and nickel, and in lead and copper ores. It is also a prominent constituent in gold tellurides.

In malleability and ductility, fine silver is second only to gold. When melted its color is milky white and a milky pink. Harder than gold but not as hard as copper, it is used in its pure state; however, it is more often used as an alloy in sterling silver. Fine silver is used in articles where a higher melting point is desirable, and it is especially useful for enameling projects because of the absence of oxides formed by copper in alloys. Silver foil, used like gold foil, can be rolled or hammered to a translucent sheet measuring 0.000012 inches, which is so thin that a blue light can be transmitted through the metal.

The standard alloy of sterling silver is comprised of .925 parts pure silver and .725 parts pure copper. Mexican silver is alloyed with .950 parts silver and the remainder in copper. Prior to 1965, United States coin silver was .900 parts silver and the balance copper. Both types of silver are subject to oxidation when heated; however, in normal atmospheric conditions, the silver alloy reacts much sooner than the pure metal. The normal oxide occurring on the metal when heated is a sulfide film produced by a torch. Silver alloys also produce oxides, cupric and cuprous, formed by the presence of copper in the alloy. Tarnish on silver is produced by sulfuric oxides in the atmosphere, certain foods, high chlorine content in tap water or even the ph level in some people’s skin. Click Here to see our silver ring collection. 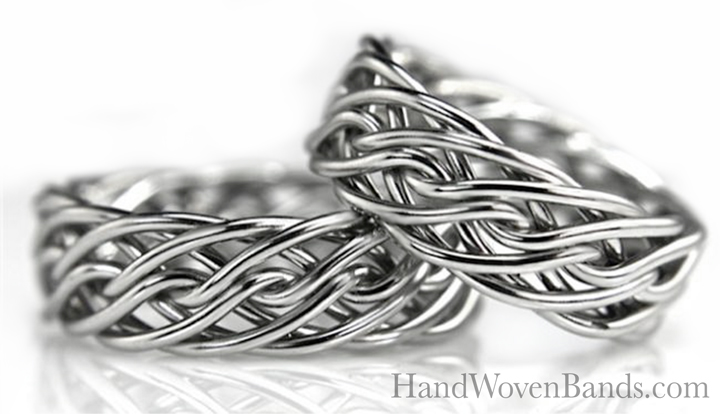